At the age of 18, Manuel Leon Hoyos is 5th and youngest Mexican Grandmaster

As promised few months ago in an interview for Chessdom, Manuel Leon Hoyos continued to play in fantastic shape, which earned him 2nd and final GM norm at the just finished Continental Championship in Cali, Columbia. Young Mexican star collected 7.5 points out of 11 rounds, having played against strong opposition like GMs Ehlvest, Akobian, Felgaer, Peralta, Vescovi, Granda, Spraggett and Rodriguez. 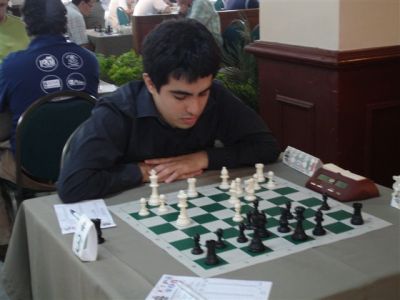 At the age of 18, Manuel Leon Hoyos is 5th and youngest Mexican Grandmaster. Mexican Chess Open, held in April this year, saw him grabbing first GM norm, and his rating will break the 2500 border on the next FIDE list. Wonderful news for the local chess fans on the eve of the World Chess Championship and another boost for the enraging chess fever. Hopefully, this fantastic talent will get a chance to play in strong round robin tournaments, and elevate himself to the super-GM heights.

Manuel sent us his last round game against Canadian GM Kevin Spraggett and said he was particularly proud of the move 12.Ne4!