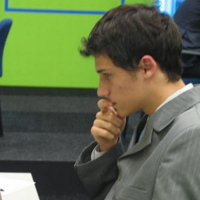 A top 100 GM, ready to step in the 2700+ super GM club, Ivan Cheparinov is one of our most fierce young lions. He started playing chess at the age of 5. At age of 12 he already had in his hands the junior chess title of Bulgaria. Coached by his father, Nedelcho Cheparinov, Ivan started winning tournament after tournament.

His first big appearance on the international scene was in Wijk an Zee where he got his first IM norm. Since that moment, Ivan started working with manager Silvio Danailov. The young lion went through a series of open tournaments in Spain. He won a total of 6 first places. This increased his self confidence and he started defeating his opponents one after the other. In 2004 Ivan felt ready to attack the national championship of Bulgaria. He got the amazing 9.5/13, leaving behind names such as GM Boris Chatalbashev (current Bulgarian champion), GM Vasil Spasov, IM Krasimir Rusev, GM Petar Genov, etc. Later this year Cheparinov got his GM title.

On the April 2007 list GM Cheparinov reached his highest rating. With a total of ELO 2646 he is currently 64th in the world. However, this is the least we can expect from him. Ivan has dedicated much of his career to helping VeselinTopalov. The young GM has been second to the 19th world champion since the beginning of 2005. Many chess specialists see Ivan as a key part in the ELO jump of GM Topalov and his fantastic performance in San Luis and other top tournaments.

That is a logical conclusion, since Topalov-Cheparinov tandem always brings novelties in the openings. Maybe the basis of the chess innovations comes from Cheparinov’s work with modern chess software. In many interviews the young GM shared that he finds in computer analysis the future of chess.

Cheparinov with his manager Danailov

Ivan shows a lot of desire in every game. When he won the Essent open group in Hoogeveen, Silvio Danailov said, “Ivan? He is the next Topalov.”

In the last several competitions Ivan always finishes top of the table. He has recently won Sigeman & Co with the fantastic 1,5 points ahead of Jan Timman, Berg, and Hillarp Persson. Before that he finished equal points with the winner of the European Individual Championship and shared first in the Morelia open.